A meeting was held in August 1974 to see if there was enough support to start a Hospital Radio Station in Exeter. The meeting was chaired by local policeman Terry Roberts who was a member of Plymouth Hospital Radio.

A dedicated team of people at the meeting offered their services to make the stay of people in Hospital more bearable through the medium of Radio plus the visiting service that was offered by visiting the patients on all the wards and collecting requests and dedications.

So HRE as it is fondly known was born and a lot of fund raising had to be organised and we were well supported by the League of Friends who gave us £500 to buy our first mixer we went on air in December 1974.

The first broadcast from Hospital Radio Exeter was made on the 22nd of December which was transmitted by the use of BT Landlines to the RD&E Hospital’s in Wonford and Heavitree and then we added on the Exeter Eye Infirmary and the Princess Elizabeth Orthopaedic Hospitals. 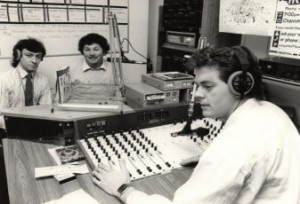 From the broom closet studios, which were located in the old Wonford Hospital our programmes were broadcast at the start for just 5 hours per week over two days Sunday’s and Wednesday and then gradually adding on extra hours and extra days (we now Broadcast 24 hours per day and 7 days per week) the original studio just consisted of one broadcast studio, a very small office, and a library; all of which covered about only 100 square feet.

With the building of the new hospital in the early 90’s, it was clear that H.R.E. would either have to move, or cease to be. Luckily the Hospital Trust agreed to locate us in the new block, so it was business as usual.  At the same time all the Hospitals were located to the Wonford site and in April, 1994 H.R.E. moved to its current location, boasting two studios, an office, racks room, music library, and a reception area. It was a studio envied by many other hospitals in the country (and still is). When we moved we also decided to renew the equipment, and after a massive appeal, were able to fit out the studio to an exceptionally high standard. We purchased all new equipment, including 2 state-of-the-art “Alice Air 2000” mixing desks. Which are used prominently by professional stations.